#1
I'd been wanting one of these fiberglass van go kart bodies for a few years now. They were originally made by F.W. & Associates Mini Cars out of Tempe, Arizona. They made a bunch of different "Mini Car" go karts modeled on real cars of the era, including Ford Econoline and Dodge Tradesman vans. Lately they have starting popping up at some of the Truck-Ins and van events I attend, which gave me "the bug" even more but has driven up the prices a bit. After I'd about given up the hunt, this one popped up for sale on Facebook Marketplace in Defiance, OH for a hundred bucks. Being the 1st (and only) candidate that fit my meager budget, I jumped on it sight unseen and sent some funds to a friend who lived near enough to pay the seller and hold the kart for me until I could figure out how to get it home to southeast PA.

Fast forward a few months, when another friend from Ohio offered to bring it to me since he was planning on visiting some family in the area anyway. I was pretty excited to finally get my hands on my new project. In my head I had it all planned out. New engine, clutch, chain and maybe some tubes in the tires and off I'd go. Hahaha! Not this time. I had been told it was "a little rough" but more or less complete. Well "rough" in the sellers estimation is a nice way of saying "scrap" in mine. The body was just resting on the tires, not attached to the frame in any way. The frame was broken in several places, and haphazardly booger-welded back together using rebar and angle iron to fill in the rotted out sections. A large section of diamond plate with some kind of kids toy seat had taken the place of whatever the original seat had been. All of the supports that hold up the body were cut off and MIA. Rust was so bad you could see daylight through the rear wheels and many parts of the frame. It did roll and steer, but that was about all. Worth noting are the original Firestone Super Stone 4.10/3.50-6 tires on the front. This particular kart was part of a promotional sweepstakes with Firestone Tires, Ford Motor Company, and Hot Rod Magazine in 1978. They gave away a real Econoline Van, F150 pickup, Courier pickup, a few sets of Firestone tires. and a handful of go karts that matched the real van and pickups. For some reason many of the van go karts went out as Dodge Tradesman bodies with Econoline badges and taillight stickers, mine included.

So now my "plan A" was out, I went back to the drawing board, literally. Got out the graph paper and mechanical pencil and designed a new frame from scratch, keeping the same dimensions of the original rusty frame but having a kick up behind the seat to allow for a live axle setup and extending the frame rearward about 6" to accommodate a larger OHV engine and give the rider a little more leg room (the original was very cramped to sit in for anyone over 5' tall). Once I had my plans all sketched up, I went to Home Depot and bought a few 6' lengths of .063 wall 1" square tubing and got to chopping and welding. After a few hours at a buddy's shop, here's what I came up with. The steering column and support were salvaged off of an old yard kart I found in a ditch.

I should add that I am not a welder or fabricator. I have been teaching myself how to do this kind of stuff as I go. If I had done a little more research I would have gone to a steel supplier and bought heavier gauge tubing. The .063 wall is sturdy enough, but proved challenging to weld for a novice such as myself. Burned through in a couple spots and had to have my more experienced buddy fix it.

Once I had the chassis welded, I ordered a bunch of parts from OMB Warehouse and got me a Hemi Predator 212 from HF. Still need to get a seeat, make some pedal brackets, a floor pan, and acquire some wheels and tires (I have a friend who's son raced quarter midget, he says he can hook me up with some used racing wheels and tires) to make it a roller. Then I will address the body and mounting it to the chassis. Here is the initial mock up, representing where I am at as of today. Thanks for reading! 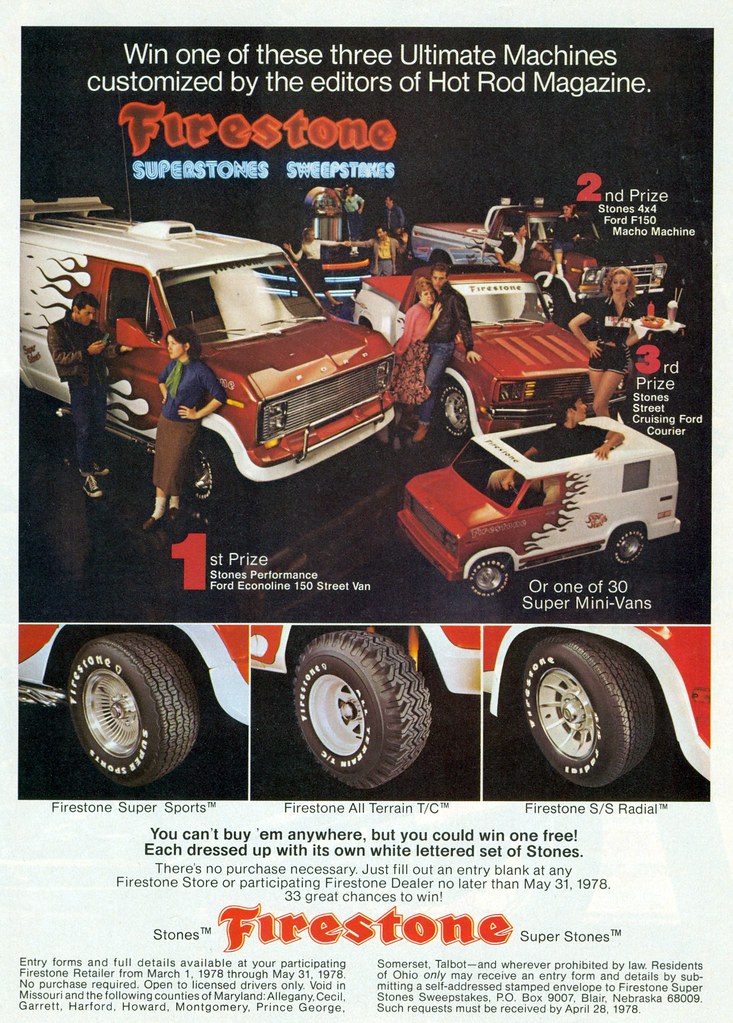 #3
2 of my good friends in the vanning community coincidentally each own matching Super Stones karts, also both with Dodge Tradesman bodies wearing Ford stickers. I have seen at least 4 Firestone karts with Dodge bodies, and only 2 or 3 with the (correct) Ford Econoline bodies.

#5
Here it is next to my full size Club Wagon at a car show. I’m not sure if I can post video here, but I also cruised thru a taco drive-thru in it! The video was posted on the streetvankartclub Instagram page if you follow that.

#6
Scored some wheels and tires and bought a seat. Mocked up with body. wide stance! Front tires clear at full lock by fractions of an inch. Need to finish brakes, pedals, seat mounting, body support structure, and tighten everything up. Getting close!

Keep up the good work.

#8
Got the chassis more or less done. Made a shorty header with an RLV muffler. Rode it around a little, it has 10/48 gearing and the governor intact so it tops out at around 26 MPH but gets there quick! Addressed a couple minor issues, then made a hoop to support the body. Calling it "done" for now, heading to the 47th Annual National Truck-In (AKA, Van Nationals) next week. Will be bringing this along to putt around the fairgrounds. I have some upgrades in mind for later on, but for now I'm happy with how it turned out.
Chassis near completion:

Enjoy yourself putting around in it at the show.

#10
that_van_guy said:
2 of my good friends in the vanning community coincidentally each own matching Super Stones karts, also both with Dodge Tradesman bodies wearing Ford stickers. I have seen at least 4 Firestone karts with Dodge bodies, and only 2 or 3 with the (correct) Ford Econoline bodies. View attachment 245695
Click to expand...
My aunt won ours in 78 and gave it to me. I’m restoring now.

#11
Superstonevan said:
My aunt won ours in 78 and gave it to me. I’m restoring now.
Click to expand...
Very cool that your aunt actually won it from the sweepstakes! I have a sneaking suspicion that they wound up giving away more than 30 (as the ad claims). Super cool to see that there are still survivors out there! Looks like a solid start, your chassis is in way better shape than mine was, and fiberglass is easily repaired. Mine will get torn apart and re-done this winter, a friend of mine who is a paint & body guy offered to fix all the cracks and paint the body for me. Gonna go with pearl white with red pinstripe flames to keep the theme but with a custom twist!
You must log in or register to reply here.
Share: Facebook Twitter Reddit Pinterest Tumblr WhatsApp Email Link
Top