Parts from Hent on eBay
H 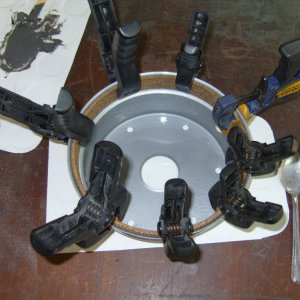 Fork Tubes come out by removing the set screws in the fork lowers on the sides near the upper and lower tube joint. To dismantle, you will have to cut the steel ring off, then reweld, once you've replaced any defective or work oil lite bushings. 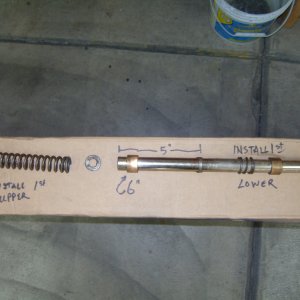 Yes, springs go on the nubs from memory, and require a bit of Kung Fu grip. I wish I had better recollection and photos, but they were intuitive. 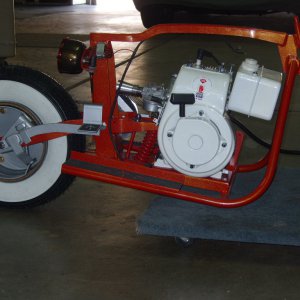 The brake lever needs to rotate on bushings in upper drawing. Lower is bushings for E model clutch tensioner lever and idler. 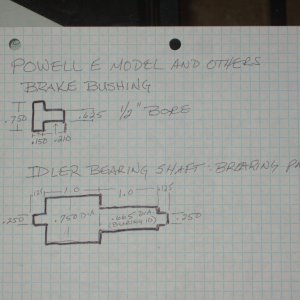 #62
Thanks Dave! Your'e the Best. I am sure I will have a lot more questions coming up. I'm going to go see if I can find the setscrews. Are they in the upper fork?
H

#64
I do not see any setscrews and upper leg on one side is bad. Looks like bottom of upper leg is bent in to hold bushings in. may have to cut bottom 1/4" off to remove lowers. May have to replace upper tubes with maybe stainless but its gonna be a job to do it. If I cut off the uppers I will have to bore out where the old ones were welded to the triple trees.

#66
Ole, I did three different Powells. There were definite differences in the front fork assemblies in all three. Now I do recall two of them had crimped lowers on the bushings. I almost remember there being a "wire" retainer in a circle that fit against it, but am wondering if that was on the Tote Gotes!

Here are two E models I did. Red one with chrome was crimped at the bottom to retain the lower bushing.
Second one is another one I did and sold as a "kit" to a member here. Note retaining screws. I am sorry for the confusion. This was several years ago now, and many bikes ago. Short term memory slippage...

#67
ole4 said:
Thanks Dave! Your'e the Best. I am sure I will have a lot more questions coming up. I'm going to go see if I can find the setscrews. Are they in the upper fork?
Click to expand...
ole my forks where put together with C clips , here's a pic . 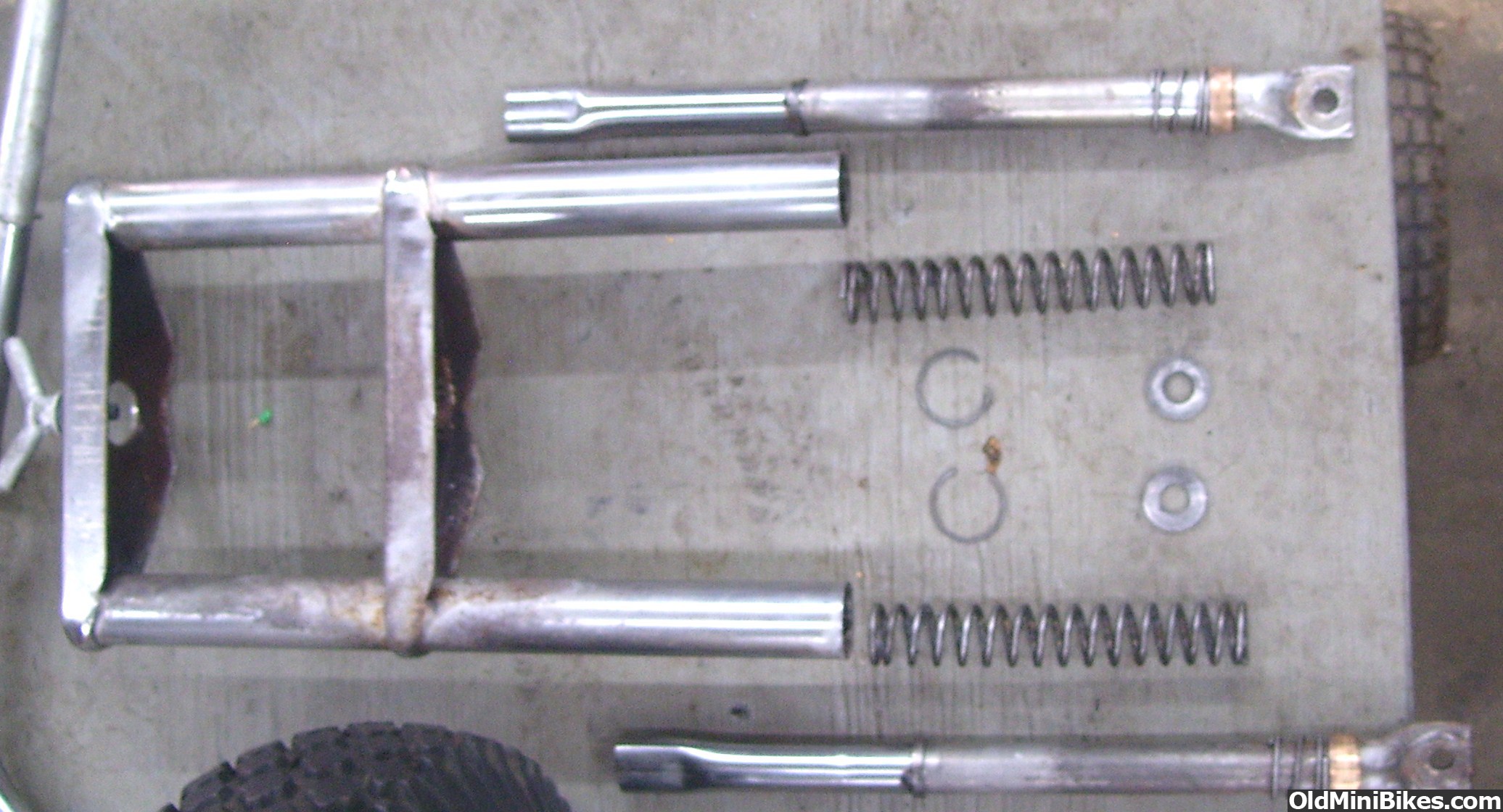 #68
I’ll check tomorrow. Didn’t see any but they are dirty. I’ll blast with brake cleaner and air.
H

#69
Hey Ole, note the differences between the forks I posted and the ones OND posted. Later on, Powell went with those crimps to hold the bushings on. That happened during the E model production. I've had both. Anyway, sleeping on this, I might have been in error. I recall having to dig out an odd type of "C" Clip as OND refers to. It wasn't a snap ring, but a round piece of roundstock spring steel that fit inside the tube and held in the guts. It looks like yours might be missing.

I "think" what I did with one bike was to mitigate a worn ring or tube, I drilled and tapped into the lower bushing and used a set screw just like Tote Gotes and a few others were done. As long as the tube slides freely, there is minimal lateral torque there.

If your tubes are crimped like the later models, you have to destroy them to replace the bushings. Also note OND's later model has the one bronze bushing, and mine had an upper and lower. I bet that crimp served as the upper "bushing." Having both ends supported is what made these bikes ride so well, unlike the simple telescoping forks on .080 tubing we see with a spring and two cups- which let's face it, were basically toys.

#70
Well got them apart, one leg had the snap ring other missing also missing welded ring. The upper springs, washer and upper bushes are stuck in upper legs, that's for another day but one of the bushes is real worn other still looks like a bush. Used a hydraulic jack to pull them apart. If you look at the pics of the upper part you can see one leg is flattened and bent very slightly. Will probably cut sleeve and weld on a new tube for the uppers. Dave my lowers look like yours just a snap ring to hold them in and one was missing.

#71
Nice! Are you going to chrome them? I have wanted to chrome some forks in the past but always just cleaned them up. I was always afraid if I popped out the steering bearing I wouldn't be able to find another or it wouldn't fit right. I think Dave found a source since then. Coming along great. Keep the pics coming.

#72
Forgot about steering stem bearings. I’ll have to think about that.

#73
Taking it apart I noticed a chain adjuster on only one side of the swingarm. Should it have one on each side? The adjuster was on the sprocket side.

#75
Thanks. Just ordered the rear suspension spring from century using the one you recommended. For the front forks looks like the upper legs will need replacing. Lowers I should be able to use.
H

#76
ole4 said:
Thanks. Just ordered the rear suspension spring from century using the one you recommended. For the front forks looks like the upper legs will need replacing. Lowers I should be able to use.
Click to expand...
Ole, did you have to order two springs? As I recall, they mandated a min. order of $50. I always thought it would be cool to experiment with springs and ride. Too expensive to play though!

I know you're more than equipped to deal with those uppers. Nice to see you rolling along with this project.
S

#77
Did you compare $ to Jones Spring? springsfast.com
Nice folks on the phone, Century as well.
I use em both from time to time.
Nice work, Holy Grail machines for me.

#78
Havasu Dave said:
Just on the chain side on my E model Ole.
Click to expand...
So that's why mine only had one on it ! Thanks Dave

#79
The springs were 23 bucks each I ordered 3 of them. I have no idea if my spring was original but it was toast. the spring on your excel sheet that you said you used matched up the best to the one in my bike so that is the one I ordered. Someone along the way put a second spring inside the original.

#80
Took apart the wheels, the front was one of the hardest wheels to get apart. There was water inside and it was so rusted both the tire and tube would not release from the rusted inside. Took about an hour on my 20 ton press and a sledge with a tire iron to get the bead off the steel side of the rim Some pics of the wheel before and after a preliminary wire brushing.