#21
Met up with Studeman68 and picked up a fine set of forks for the project - thanks man!

And I'm not too sure on this move at this point, but I've already cut out the base for the seat, the pattern for the material and the foam just arrived:

And finally, due to the 8 horse engine's footprint, I wound up having to figure out a custom solution for the jackshaft. It's not finished yet, but it may do the trick: #24
chatten63 said:
I hate to say it but the front end is wrong for your build. Can you post a picture of the front end that is on the bike now. With that front end you have no front suspension. That is a VT1 or early VT2 front end. It use a small spring like the boonie bikes had for front suspension
Click to expand...
Yeah, the lack of suspension is a downside of this particular fork, but the price and the fitment is actually quite good. I'll post an updated pic with the fork installed after I have the wheel & tire in hand. Eventually, I may upgrade to a suspension fork, but that will come down the line.

As for your VT, it looks great! The blue with white fenders / engine works very well.

#25
As for your VT, it looks great! The blue with white fenders / engine works very well.

#26
chatten63 said:
I hate to say it but the front end is wrong for your build. Can you post a picture of the front end that is on the bike now. With that front end you have no front suspension. That is a VT1 or early VT2 front end. It use a small spring like the boonie bikes had for front suspension
Click to expand...
Thanks Rick, That's what I thought when I spoke with Rob on those...I figured VT2 or 3. Given how badly put together the other ones are per his description I figured these were definitely better/safer that what he had...and at least they are Heald.

#27
Been spending a bit more time working on the bronc, but not too much to show for it. I built a plate to bump the engine up by a quarter inch & have been wrapping up the jackshaft assembly. It doesn't look much different from the prior picture, so no new pics. Not too thrilled with how much room the 40 series TAV parts take up on this thing - thinking I may need to move the engine inwards a bit. Hoping it doesn't come to that.

I did pick up a front wheel from Markus & will be cleaning it up, painting it white, and popping in new bearings: 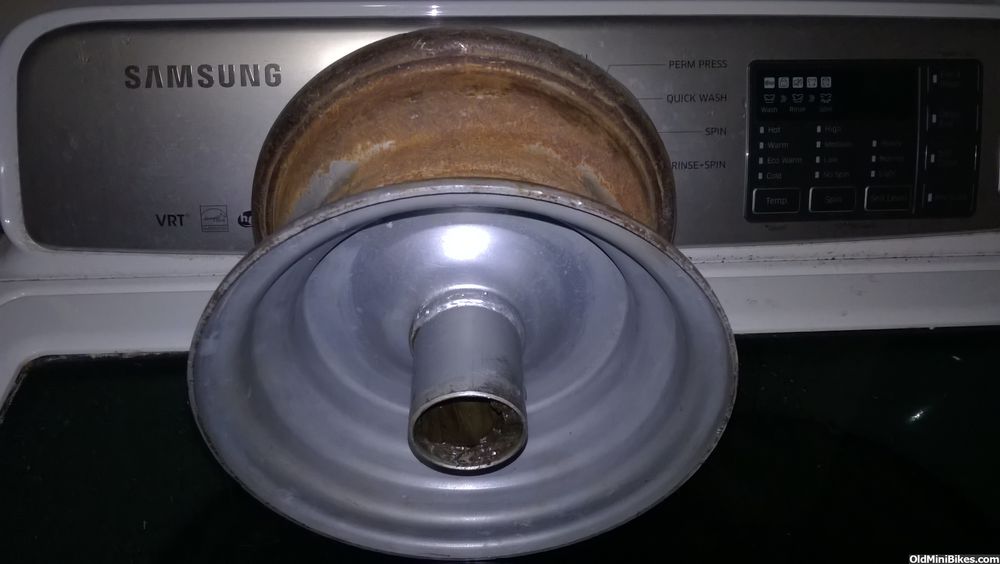 Beyond this, I have been trying to find the serial number on this thing. I do realize the s/n isn't really useful, but I was hoping to find it. The bike is heavily pitted all over, including on the seat bracket. Because of this, I am curious if anyone could point me to exactly where the number should be on the seat bracket. I believe I found some light remnants of the number, but would like to confirm: 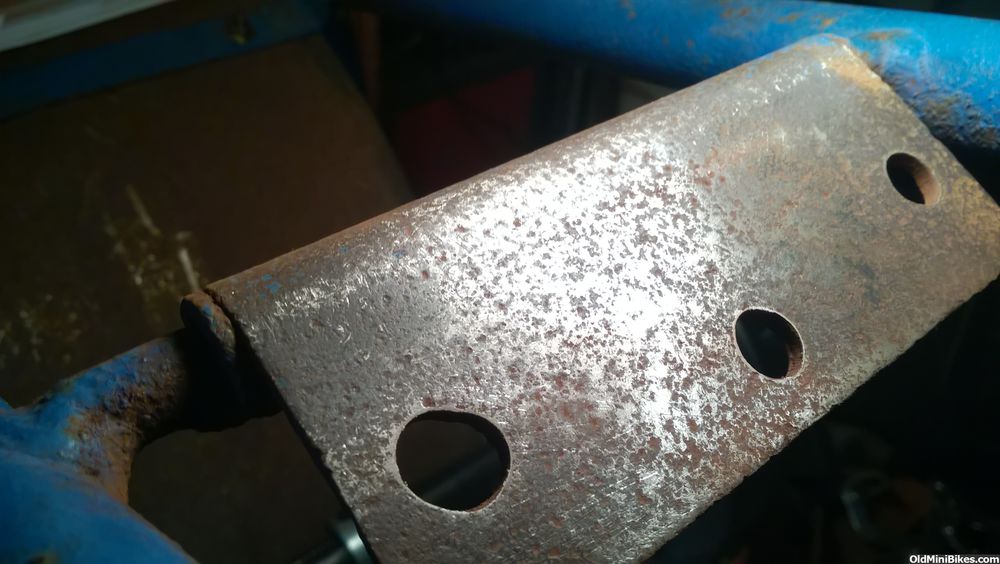 #28
You have it right. That's where the serial number is. It can be a bear to read.

#29
Thanks Doc! Any idea how many digits these should have?

Did some more work to the bike. The engine plate has been modified, with one pair of slots being inexplicably lengthened and a piece of metal added to the front. My apologies about the image quality:

Removed the extra plate from the front & started fixing one of the slots:

#31
Cool, that's all I can see as well. I wanted to validate the number before it gets painted, since the paint will completely fill in the numbers.

Spent some more time on the bike. One of the lower tubes was starting to rot out, so I had to cut out some of it and put in a strip of new metal. Also filled in part of the other modified slot.

#32
Mocking up some of the pieces, to get an idea of where things sit:

#33
Haven't been posting much, but there has been progress. Seat is moving along, jackshaft is basically together, and I think I've figured out the gas tank mounting. Having issues with the sprocket, so I will need to find a replacement.

#35
Coming down to the wire, but I have some movement:
- I shaped the seat foam and now have the seat being upholstered by a family friend.
- The rear wheel was badly rusted, so I let it sit in vinegar for about a week, taking it out every few days to remove the loose rust. It's badly pitted, but it'll do the job.
- Got a replacement rear tire
- Picked up a replacement sprocket from Chatten
- have a disc brake kit which I'll use on the sprocket

Lots to do, not sure that it'll make it by the deadline. I've been part of a new helpdesk launch and have been rather preoccupied.