#1
Originally identified as a Bird Wren, but without neck gussets and wrong rear axle tabs, it looks to not be a Wren, or even a Bird. 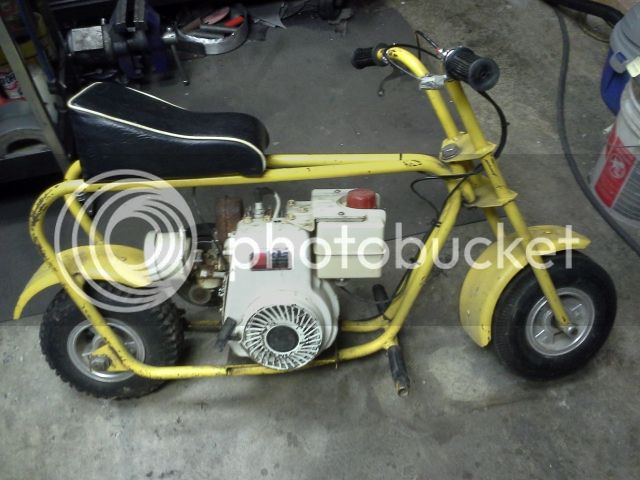 I alread started a build thread for it titled "The little Bird Wren", but may have to rename that...

#2
If you look closely at the brochure I posted there are no gussets at the neck and the axle tabs are different from the later Bird Wrens. #3
Here is a later Bird Wren with gussets at the neck and much different rear axle tabs. Plus rounded triple trees, fork plate and taller handle bars. #4
I guess we have it then. My sincere apologies for even doubting you. I am in awe... :bowdown:

#5
One other thing to add. Sometimes bike are produced slightly different than the initial advertisement. Many times when a mini bike, toy, or even a car are first introduced they use a prototype in the first ads. They can have slight differences on the production model. Plus who knows if there has been modifications to a bike throughout the years. The General Appliance bike brochures don't show a brake on the left rear wheel. Most likely to showcase the wheels but non the less the bike would be different when you got it than what you first saw in the brochure.

#6
Wow...best answer twice for the same bike. I don't think Tom needs to pad that number for most answered. :laugh:

#7
"mountain man george" had a good example of that bike about a year ago, I tried to search but I don't think the picture ever got linked/saved onto the server. it still had the big/little wheel combo and braced fenders etc... dont see much of the early ones except for the blurry small print adds.

#9
I really should have blown up the ad pic above before questioning it. It is almost exact.

I would expect changes in production runs, just like the car companies do.

And yes the funky braced fenders.

This one originally did have the scrub brake and you can see where the mounts were ground off.

I will be posting a bunch of pics to the build thread soon. This one may be too far gone to do a true restoration. :no:

#10
The axle tabs on the brochure bike are not the same as the yellow bike either nor is the fender notched for the chain or have support brackets. Also has no sign of a scrub brake and the rear fender mount is tubing, but the bike could have been modified and refitted with new things over the years. The rest looks exactly the same, especially the forks and handlebars. :shrug:

#11
The ad above is the closest found so far. Problem is, this bike has been modified quite a bit. Bird may have moved the axle tabs so the notch matches the lower framerail. :shrug: