Parts from Hent on eBay | Hent.com Videos on YouTube

#1
So, I'll give a little background on myself and this project. Or skip the wall of text to the pics.
2 years ago (spring of 2019)I picked up a 2 seat cart and decided I would get it ready for my oldest nephew Logan (9 years old) to drive. I got a new 212, clutch, gas pedal, brakes, seat etc. and put it all together. I did a mechanical disk brake and it had one wheel power. He came to visit one last time and I had it sitting by the driveway where he would see it. I had put 2 bolts loosely into the junk engine that came with it. Of course a couple of flat tires. When he saw it his eyes lit up and asked if he could drive it. I said "sure if you can get it to start". He pulled the rope a dozen times and nothing. Engine doesn't even have a carb or gas tank on it. I gave it a few pulls and said "I have an engine in the shop that might fit". We pulled the junker off and bolted the new one right on. The chain lined right up on the clutch and everything. The throttle cable was even the right length. Air in a couple of tires and it was a driver. We "built" that go cart and it's been running around the yard since (well unti last month the motor died). He got to ride it a few times then moved 2000 miles away. The grandson Jr. (6 years old) rode it a lot that summer when he came visit. Late in 2019 Logan's brother Kaiden (6 years old) got to come out to visit. He hadn't seen the go kart because he move away before it was built. But he drove a lot of circles around the driveway in it.
In 2020 just Jr. and his friends drove it. So Jr. decided he wanted a dirt bike for Christmas last year. Well, he got the Chrome 1969 J.C. Penney El Tigre when he came to visit this summer. I did about the same thing and he helped build it. I posted on here some questions and stuff while ordering parts etc for it. The first afternoon he got here I had him polish the handle bars while I scraped the rest of the old paint off it. The next day a buddy came over and we assembled the whole thing with Jr's help. So he got to build his mini bike.
That leads me to this yellow cart. Both Logan and Kaiden are coming out for a 10 day visit in early August. I asked Kaiden what he wanted to do while he is here and he said he wanted to go camping. I asked if he wanted to do anything else and he said "I want to build a buggy for me like you and Logan did". So I want to get this thing ready to bolt on a motor and go.
So if you read the whole wall of text here we are, the yellow cart build. I posted in the "what is it forum " and didn't get much info. So I'll make stuff work as needed.
It looks like to me it was a Chinese kart from mid to late 90s. I'm going to power it with a gx160, that has a torque converter already. I'll just do a clutch on it. That's the easy part. I think it had hand throttle and hand brakes. I'm going to do foot controls. Part of the whole process of building stuff for the nephews and grandson is to get them ready to drive.
So picture time. These were already posted but I'll do them again for this thread. I'll fix/weld the right spindle.

Those little guys will remember that stuff the rest of their lives !

On a side note, foot pedals, throttle cable, and a hydraulic disc brake setup are on order.
I also ordered the clutch and 4 new tubes on Monday.

#5
Got most of my parts for this build.
Pedals and throttle cable from Gopowersports.(some welding required, not sure exactly how to set them up yet)
Hydraulic brake setup from ebay.(looks like it should work)
Clutch and tubes from Amazon.
I'll use the tires from the snowblower for the rears. I have other tires I can put on the front. LF rim has a chunk missing from it, so I'll put another wheel I have on it. It won't be an aluminum matching one but I don't think Kaiden will care.
I won't have time to start on this until Sunday afternoon. Kaiden and Logan should be here sometime Tuesday or maybe Wednesday. I'll be busy getting this one ready and doing the 179 on the Big Kart.

#6
That's a Tyrod go kart. I believe the brand was known as Zooma. Could be a model II or IV; not sure if they're sequentially numbered (I, II, III, IV etc). Chinese made, from the early 2000s so might be 20 years old by now. Looks mostly complete and the seat and diamond plate floor pan is how they came stock {seat is missing the cushion but I believe it's the same as the one Azusa sells}.

They didn't have pedals--all controls were on the wheel like the Honda Odyssey buggy from the 1980s. Tyrods were obscure to begin with and are kinda rare now, actually. 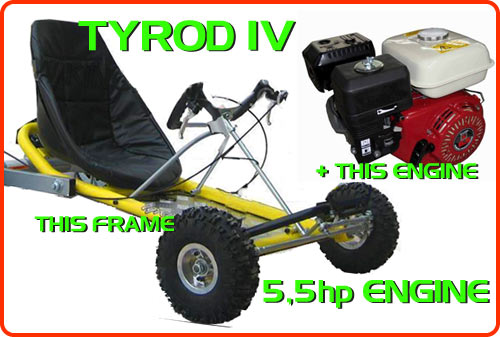 Here's a site that might have spare parts {looks kinda sketchy}: https://sdscooters.com/Parts/TyRod_IV_Parts.html

#8
Harquebus said:
That's a Tyrod go kart. I believe the brand was known as Zooma. Could be a model II or IV; not sure if they're sequentially numbered (I, II, III, IV etc). Chinese made, from the early 2000s so might be 20 years old by now. Looks mostly complete and the seat and diamond plate floor pan is how they came stock {seat is missing the cushion but I believe it's the same as the one Azusa sells}.

They didn't have pedals--all controls were on the wheel like the Honda Odyssey buggy from the 1980s. Tyrods were obscure to begin with and are kinda rare now, actually.

Here's a site that might have spare parts {looks kinda sketchy}: https://sdscooters.com/Parts/TyRod_IV_Parts.html
Click to expand...
Thanks for the cart ID. I'll check your referenced site with caution.

#9
I74 said:
I was think'n originally hand controls also.
Click to expand...
Yea, me too. It will get foot controls soon

#10
The gx160 for this cart runs, clutch is installed.
Hydraulic brakes are installed. That last sentence was about 5 hours. The caliper fell apart and would not go back together for anything. Installing pedal and moving caliper bracket were way more time consuming than they should have been.
Gas pedal is installed, but waiting on throttle cable. I ordered the wrong one the first time. New one should be here today (it is after midnight, so technically its tomorrow). I'll have to install a bracket for the throttle cable once I see what I got.
Tires are done. Right spindle is fixed.
Seat is off. Kaiden gets to help me put that on. And he gets to help put the engine on, and change the oil. Also we have to do the chain.

#11
Oh, and the bolt that holds the left tire/sprocket on twisted off. I welded a nut on the part sticking out about 7 times before it is now broken off 3/8" down in the end of the axle. I got it soaking with Gibbs till morning. Then the drilling and easy out project starts.

You will win in the end though.
M

#13
Yet this is Tuesday, if'n memory serves me the young'ns will be knocking on your doorstep soon-ish...
Really like the way you go bout getting them to build their Shtuff... Aka creating/building memories that'll last a lifetime 4sure!
That's what this is all bout w/o a doubt sir.

Watch out for the Rabbit he stalks unsuspecting souls... lol :-D

#14
The axle bolt broken off down inside fought me as long as it could. The Gibbs didn't help, P.B. Blaster and heat didn't help. I ended up drilling and trying easy outs. None worked but I didn't go until I broke the easy out. I drilled and tapped for a 7/16" fine thread.
All while I was doing it Kaiden kept asking "is that the bolt so I can drive". I had him help put the seat on and the 5.5 Honda. He can even pick up the engine about 8". Then the UPS truck showed up with the throttle cable so a quick bracket and set the cable ends. All while Kaiden was waiting very impatiently. Luckily my wife came out and gave rides to the boys on the quad to help entertain them.
When I finally got it done he was off in a hurry. Only drove off the driveway into the weeds once. He loves it. Logan tried driving the big kart but I had to have him help move the seat back. Then I had to adjust the brakes on it. Then it got dark. No chance for pics. I'll post some tomorrow.

You will win in the end though.
Click to expand...
It took a while but I did win

#16
Mark Brooks said:
Yet this is Tuesday, if'n memory serves me the young'ns will be knocking on your doorstep soon-ish...
Really like the way you go bout getting them to build their Shtuff... Aka creating/building memories that'll last a lifetime 4sure!
That's what this is all bout w/o a doubt sir.

Watch out for the Rabbit he stalks unsuspecting souls... lol :-D
Click to expand...
Rabbit? What am I missing out on?
D

#17
ChromeBikeGuy said:
Rabbit? What am I missing out on?
Click to expand...
As in falling down the rabbit hole, (Getting in deep)

#18
desert rat said:
As in falling down the rabbit hole, (Getting in deep)
Click to expand...
Ok. Gotcha. I'll use my Elmer Fudd rifle and shoot that "Wascally Wabbit" if it gets too bad. Until then yea, we're having fun and burning gasoline.

Kaiden doing his best Clint Eastwood impression picking up the 160

#20
So here we are a couple days later.
The yellow cart is quick except it keeps dieing when he runs full throttle. I been thinking it was a fuel delivery issue. It dies at half a lap every time he tries to go fast. He can do 2 laps at low to mid throttle without an issue. We've done a lot of restarts at mid lap. Every time he goes full throttle it dies quickly or at least by 1/2 lap.

I've swapped on the new carb I bought for the 179cc in my other thread. I replaced the fuel line. I cleaned the little filter that goes into the fiel line. Swapped carbs back and forth, changed the spark plug twice. Nothing changes it dieing at full throttle.

So the only thing left I can think to change is electrical. I've never messed with that part of these motors. I have new parts because I have bought a couple of tune up kits on ebay.
It was cheaper than just a carb alone. Any thoughts on what I'm missing?
And I can only get this one picture to load right now. It's Logan on the big cart with a new 212 Bilt Hard and Kaiden on the KAIDSTER as he calls it.
You must log in or register to reply here.
Share: Facebook Twitter Reddit Pinterest Tumblr WhatsApp Email Link
Top