#1
So forgive me I'm young an new an looking for answers.. So I found what my research tells me to be a later model lil Indian. With a hs40 an I want to wire a kill switch to it because my son wont enjoy the shock from the plug ground. Now there was a wire that's grounded to the block an I figured if I wire a momentary switch in-between to open the ground it would kill spark. It didn't an even unplugged doesn't kill ignition. Now this motor has the mag inside the flywheel not outside an anyone I've asked in my area isn't old enough or have to knowledge really to give me an answer. anything will help ty also I'd post pic but no idea how
M

#2
There should be a small insulated wire coming out of the coil winding, Grounding that wire will short across the points and stop the spark. Otherwise a wire can be attached to the screw that anchors the condenser wire and grounded to get the same effect.

On the left side of the points cover(the silver thing) there is a post....should have your coil wire etc attached...you’ll need to run a wire from that post out from behind the flywheel (be carful not to let flywheel rub it) and ten attach it to the switch of your choice and another wire from said switch to the frame...attach switch to bike

#4
that wire that is screwed to the plastic insulator plug needs to go to ground to shut the engine off. sounds like you are running a switch inline on that wire and not to ground. Its on that plastic block to keep it from grounding out. Its there so you can eaisly run a kill switch to it ( single wire switch works fine that is connected to the frame as long as it completes the circuit. Powdercoating everything can hinder that connection sometimes) they didnt start putting them on till like 1970/71. If you did run that wire to ground and it did not kill the engine then there is a break in that wire from the insulator block back to the points connection....like skip showed it runs to that terminal. The engines that came with the external kill wire will just have a spade connector there for that wire.
C

#5
For kids, well for everyone, i like a hard on/off switch. Personally i use the DB30 style on/off as it's very functional and inexpensive (ebay). Not like the momentary style switches (though that would be 'vintage correct' for most 1970s bikes), that you have to hold down for a period to kill the motor. The only down side to a hard on/off switch is if you forget to check the switch before starting... pull pull pull, damn, switch is off! ha! 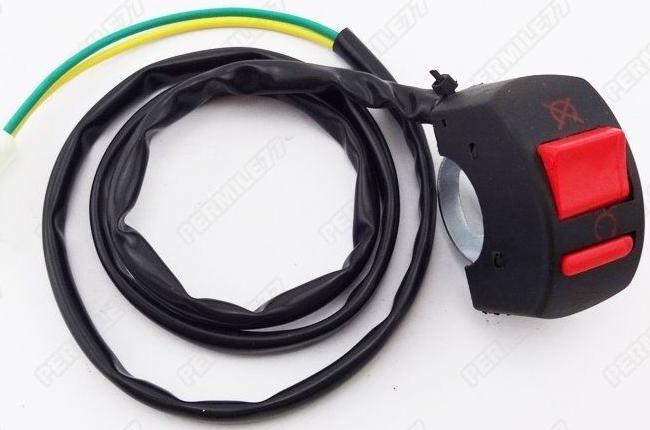 I always wire a hard ground to the motor too. Technically you don't need it because the frame is ground. But i just like a very distinct ground. Otherwise paint can inhibit the ground, and then the kill switch does not work. The two wires in the picture below go directly to the DB30 style kill switch's wires. The green wire is the hard ground. The blue wire goes to the point nut... 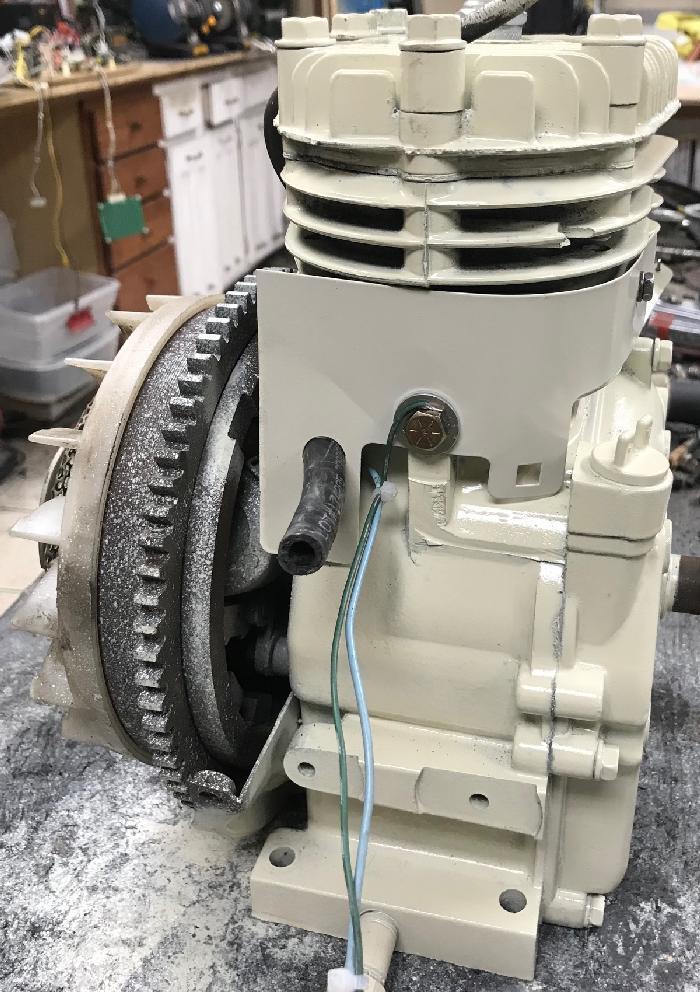 If it's a points/condensor model HS40, you need to remove the flywheel to get at the points nut. In the picture below the blue wire is the added wire that goes to the kill switch, and is attached to the points nut. (ignore the blue arrow, that's the condensor). 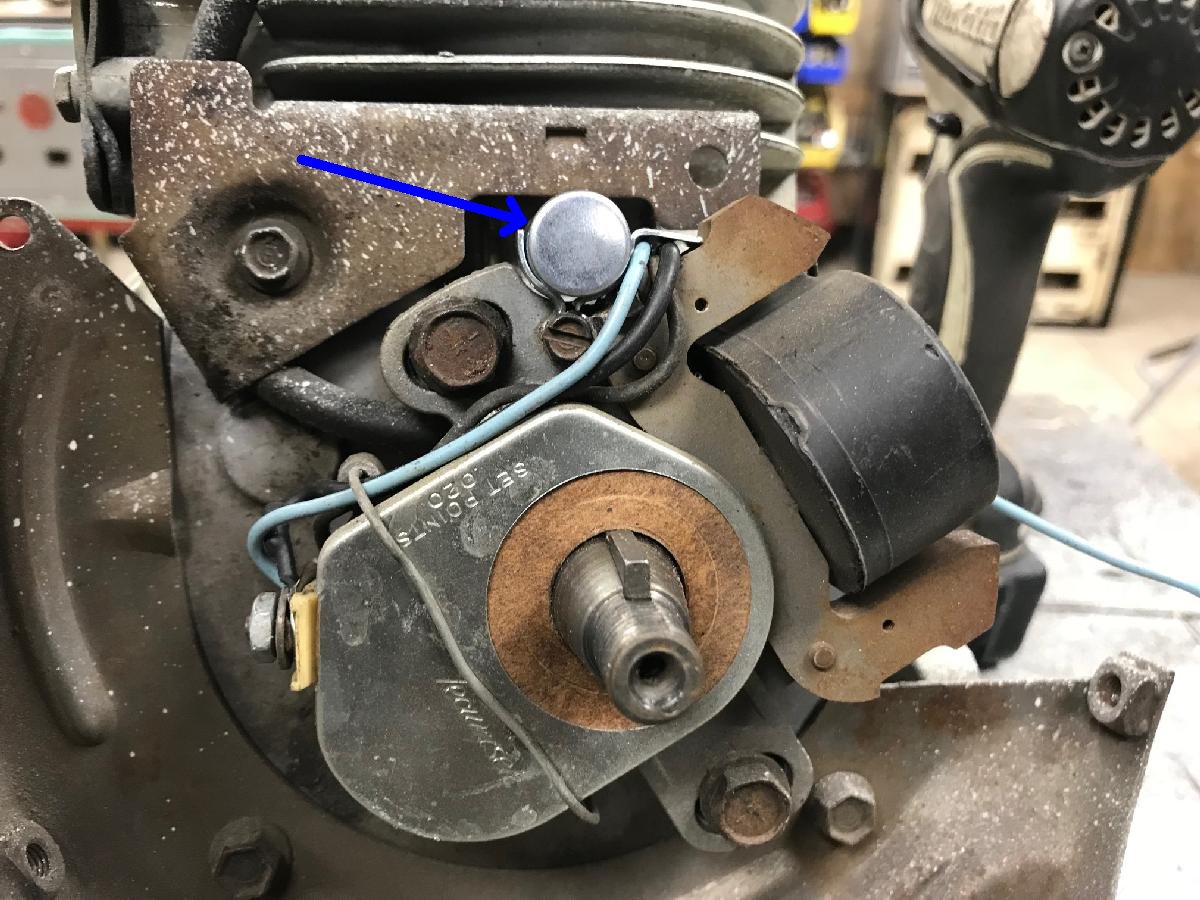 If it's an CDI ignition HS40 (1983 and later), then you don't have to remove the flywheel. Just attach a wire to the coil (blue arrow). #6
In this video I did of one my rebuilds It shows that connection prety good and how they utilized it n a Mini bike application engine. Skip to around 40-60 seconds and it shows it pretty good, on the later engines that insulator block had the spade connector so I just slipped my single wire kill switch that is mounted to my little engine test stand to make the ground at about 2:00 you can see me just use my foot to press the kill button, easy breezy if you have the insulator already on your engine

#7
Thank you guys so much! Also here's the restomod. Found in trash. someone deff crashed it but some heat an my bike hammer fixed all that an it was build it new or remain garbage

#8
Drews57 said:
Thank you guys so much! Also here's the restomod. Found in trash. someone deff crashed it but some heat an my bike hammer fixed all that an it was build it new or remain garbage View attachment 256991
Click to expand...

#9
Those are fun, but really short! I suggest using really good wood for the base of the seat as it sticks so far off the back, I'm 6' so my ass was hanging off the back. I cracked a brand new OEM from Lil indian (they have really cheap wood in those seats) off the first jump on the dirt road near my house on the first run after cleaning the bike up. 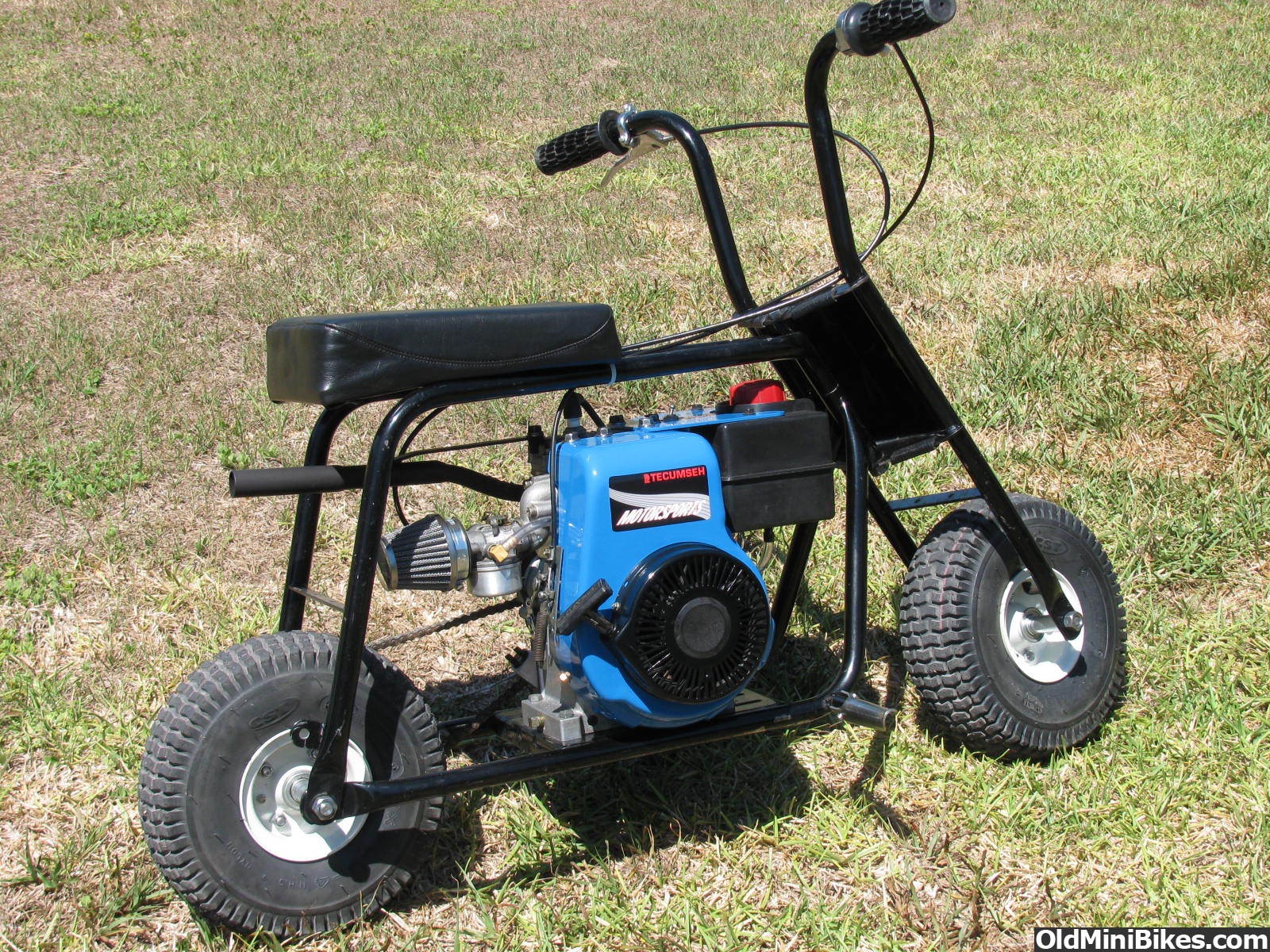 #10
Drews57 said:
Thank you guys so much! Also here's the restomod. Found in trash. someone deff crashed it but some heat an my bike hammer fixed all that an it was build it new or remain garbage View attachment 256991
Click to expand...
Your forks still need to come forward a inch.... She is going to steer squirly. .
But the good side is that you have front forks...look at my free builder needs.

#11
Yeah I agree those forks are bent. You’re gonna have to put them on a press and straighten those suckers out
D

#12
Thanks I honestly didnt know how far they went out I just knock them straight to begin with since then I've prolly knocked them about 1 1/2 in more. much better now. An when I say it was bad boy was it... Been spray painted over an over the cooling fan fins where all broke off I honestly can't believe it ran an made good compression. Pulled the head an valves an didn't looks bad oil deff needed a flush an change. Wheels where shot. Pipe was rusted beyond repair. carb look like someone took it off an threw it down the street. I'll be posting more for sure tho as I've caught the bug like anything that goes vroom vroom thanks for the help
You must log in or register to reply here.
Share: Facebook Twitter Reddit Pinterest Tumblr WhatsApp Email Link
Top